Bristy 11 a Minor Hindu girl of grade-7 of Bogra kidnapped and raped brutally for 5 days by Mohammed Azizul Sheikh- 25.  On 8th May 2016 at around 7pm, Bristi’s schoolmate Shirin causion of the perpetrator  a Muslim girl and

also a neighbor came to Bristy’s house and requested to go to a nearby house to bring some school note from another girl, Bristi agreed unwillingly. When shirin brings to Bristy  on the 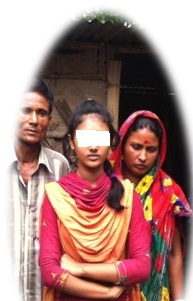 road near by their house. Suddenly, Azizul come and pointed a  knife at Bristy. Azizul and other threw her into a micro bus and run away of unknown destination.

They seduced her with chloroform . In Bristy’s own words, “I was senseless and while woke up at a room, fully naked and raped. Azizul was at the room. After that day, he repeatedly raped me and frequently  changed one place to another place that none can get any information about  Azizul. I was crying all along while he was raping me like an animal. After 5 days my father and few local people rescued me.”

While kidnapped, Bristy tried to escape, but soon weakened by the affect of chloroform in a handkerchief used to seduced her. Ronjit, Sukumol and Promila age 27-35 witnessed the kidnapping but kept mum as Azizul threatened with a knife to kill them. Do you want  justice? I asked. Bristy replied, “Definitely, Azizul did the same thing with other Hindu girls before me. Because of embarrassed to their parents did not come forward and police administration also was reluctant to do anything, but I want justice, I want justice.”

Bristy’s parents are poor (Father: Amal Chandra 45 &MotherRenuka Rani 42 of GangNagar, Mahjpara, Shibgonj, Bogra). She studies at  A. M. High School of GangNagar, Bogra and she wanted to be a teacher. She is a good student and always helped her mother. Azizul and another Belal used to tease her on the way to school. Her parents complained to the parents of Azizul, but nothing happened. A case has been filed at Shibgonj Police Station (Case# 13; dated 10th May 2016 under section 7/30 of Women and Children Repression Act,2003), but police as usual did nothing. Now the perpetrator is threatening the victim and her family to withdraw the case or face death. Left picture -Bristy with parents.

Bristy’s news was first published in a national daily in Dhaka, the daily Purbachal, on 15 May 2016. A team lead by Chandan Sarkar-Research and Empowerment Organization had visited her on 20 May 2016. The team also talked with local police administration and others neighbor people and community leader.

‘I am Rokshana akter mim- 07 years, I read in class grade -03 of Ahmebabad Government Primary school,Khondo, Trishal, Mymonshingh. On 16.05.2015 at 7pm  while I am coming from my neighbor house to our home suddenly Mohammed Rasel – 25 years has come  and captured my mouth with a tawal. 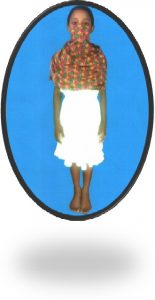 He keeps me into his arm and bring me into his room and lie on me in his bed and get off my shalower and kamis forcefully. After that he lie on my body and brutally raped me. I had cried for pain but I don’t able to sought because he captured my mouth with tawal. After a while Mohammed Rasul thrown me from his room and threatened me “Don’t tell  anyone unless I will killed you”.  I returned to our home and  busted to help. Few people including my Grandpa and Grandma come, I told them everything.However, blooding is not stop it was blessing toward my legs to my feet.

Roksana is a daughter of Mohammed Abul Badsha – 40 years,Vilage – Kustia-1 Khondo, Trishal, Mymonshingh. Mr Badsha is working in Dhaka as a day labourber. Roksana’s mother works for maid servant in Dhaka. They have two daughters elder one has married and youngest  is Roksana who is staying with their grand parents at Mymonshingh. Mohammed Rasel is a neighbor of the victim. Due to rape the Roksana is sick and under the treatment of Mymonshingh Medical College Hospital and her conditions is critical. The doctor said Roksana is not able to take birth at her life.