Posted on May 27, 2017 Categories: News, Research and Publication, Update No comments yet 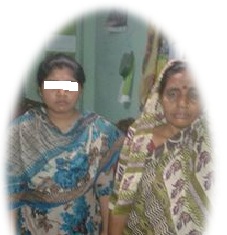 Bristy -11 a minor Hindu girl of grade-7 of Bogra was kidnapped and raped brutally for 5 days by one Mohammed Azizul Sheikh, 25. On 8th May 2016 at around 7pm, Bristi’s schoolmate Shirin, a Muslim girl and also a neighbor came to her house and requested to go to a nearby house to bring some school note from another girl, Bristy agreed unwillingly. By this way, she was kidnapped at knifepoint by  Azizul and others by a microbus.

They seduced her with chloroform to an unknown place. In Bristi’s own words, “I was senseless and while I open my eyes in a room, I was fully naked and raped. Azizul was at the room. After that day, he repeatedly raped me and also changed places. I was crying all along while he was raping me like an animal. After 5 days my father and few local people rescued me.”

While kidnapped, Bristi tried to escape, but soon weakened by the affect of chloroform in a handkerchief used to seduced her. Ronjita, Sukumol and Promila age 27-35 witnessed the kidnapping but kept quiet as Mohammed Azizul threatened ned with a knife to kill them.  Do you want  justice? Bristi replied, “Definitely, Azizul did the same thing with other Hindu girls before me. Because of embrassed parents did not come forward and administration also was relactant to do anything, but I want justice, I want justice.”

Bristi’s parents are poor (Father: Amal Chandra 5 &MotherRenuka Rani 42 of GangNagar, Mahjpara, Shibgonj, Bogra). She studies at  A. M. High School of GangNagar, Bogra and she wanted to be a teacher. She is a good student and always helped her mother. Azizul and another Belal used to tease her on the way to school. Her parents complained to the parents of Azizul, but nothing has improved rather perpetrator is piloting from parents. A case has been filed at Shibgonj Police Station (Case# 13; dated 10th May 2016 under section 7/30 of Women and Children Repression Act,2003), but as usual did nothing. Now the perpetrator is threatening the victim and her family to withdraw the case or face death. Bristi with parents in picture.

it’s news was first published in a national daily in Dhaka, the daily Purbachal, on 15 May 2016. A team lead by Chandan Sarkar, Chairman of REO-Research and Empowerment Organization had visited her on 20 May 2016. The team also talked with local administration. 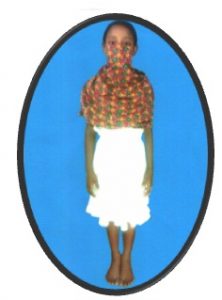 “I am Rokshana akter mim- 07 years, I read in class grade -03 of Ahmedabad Government Primary school, Khondo, Trishal, Mymonshingh. While I am coming to my house  from my Grandma who went to work at neighbor house. On the way of our house,  the perpetrator Mohammed Rasel’s -25 room, at 7.00 pm suddenly he kept my arms and keep a towel at my mouth and forcefully enter into his room. He kept me into his arm and bring me into his room and lie on me in his bed and get off my shallower and kamis forcefully – mercilessly raped me. The Date of occurrence was 16.05.2016 at Mymonshingh”. When the blood has come out – I  was suffering from pain but I don’t able to sought because he captured my mouth with cloth.

After a while Mohammed Rasul thrown me from his room and tell don’t tell this to anyone, unless I will kill you.  I came to our house  at corridor, I busted to help and cried. Few people including my Grand pa and grand ma come, I told everything to them.However, blooding is coming toward my legs to my feet”

Roksana is daughter of Mohammed Abul Badsha–40, Vilage–KUSTIA-1, Khondo, Trishal, Mymonshingh. Mr Badsha is a day laborer  and works at Dhaka. Rokshana;s mother also working at Dhaka as a maid servent staying with her husband. They have two daughter, elder one has married. Youngest one is Roksana is staying with their grand parents at Mymonshingh. Mohammed Rasel is a neighbor of the victim. Roksana was admitted to  Mymonshingh Medical College Hospital while we meet her condition was critical. The doctor said due to forcefully rape her condition is so bad may be she is not able to take birth at her whole life. 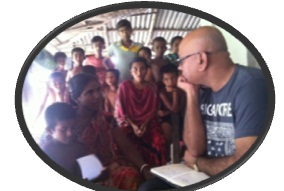 “I am Malati’s – 07 years old daughter, student of grade 3, Daughter of Saran Partha -42 a  day laborer.  Malati’s has a brother; Biswajit-14 is a student of grade 8 at local school.  A  local Rickshaw puller Mohammed Shorab -45 who  bring Maloti’s teacher regularly”

Mohammed Shorab-45, frequently visited their house and trying to reach Malati with some trophy. One day, Malati’s mother was sick for viral fever -104 temperatures and his father and brother was not at home.

Mather Kanika Rani -37 is not able to wake- up and not able to pull up her head even due to fiver. Konika Rani told to her daughter Malati   to go to the shop and buy some bread for her because she was very hungry. Malati went to buy some bread for her mother at near right a local market. The market has no crowd, suddenly, she saw in a tea stall Mohammed Shorab is taking tea. When the Mohammed Shorab saw, Malati – he come out and pulling him into his arms and bring into a dark place into the different tiny shop of that local market.  Mohammed Shorab kept her mouth into his hands and told, if you sought, I will kill you. Inside the shop, Mohammed Shorab mercilessly raped her.  When the blood has come out, he thrown her over there and flown away.  When Malati was crying into burst with pain, one local people come and rescued her from that Shop.

When we visited on 25.5.2016, the Parents didn’t do any FIR against the Perpetrator. But what we heard that the Perpetrator has four wife’s and four children only 4th wife staying with Mohammed Shorab. His existing wife has come to request to Malati’s parents don’t to do any police complaint, unless they will die because they all depend on the perpetrator. 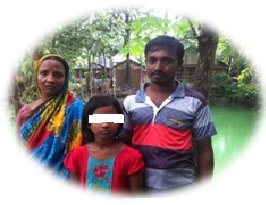 Aadhaya -07 years old. Can you think even among the girls who is Aradhaya? Yes, I am telling you that the girl who sit with her mom only 7 years old class 3  small child. Three months before when her mother was sick with viral fever. Rani 35 years old she could n’t move even Her son  Satyajit -15 years old was not at home. She is asking for some biscuit a cheap because she was very hungry and not able to cook. Her daughter Aradhya -07 years old – due to her mother sick, she went to the near ride Anisodhoha bazaar to buy some biscuits or cheaps packet.

There was a day around at 10 am. In the local few shops over there but there are no many people. One lady tea seller Rokeya -45 is selling tea. Beside the tea stall, there was one dark room.  Md Shorab Gazi-50 a Rickshaw puller ( Van Chalok) and day labor. He has three wives and 4 children.  There is a primary school near Aradhya houses. A lady school teacher is regular coming to school with his Rickshaw.

When  – he pulling the rickshaw- he targeted the Aradhya, sometimes asking – small kids please do come I know your father, grandfather please do come with me. Sometimes forcefully keep her in his arms.

That day – while the Aradhya is coming for to take chocolate, Mohammed Shab is calling please do come I will give your chocolate to you. When she went for a chocolate from Sharab then he captured her and put into the room and sit into his leg and keep off her mouth and harass her. When the small girl is crying he keep her mouth that the sound is not come out from her mouth.

The ritual Festival is going on of their relative hoe at the near by. Papri is a examine. She is taking her preparation all the family members went to attend the occasion. She was alone at around 7.30 pm she finished her study and going to join the occasion. When she came out from her room suddenly  two local terrorist Mohammed Farid  came and captured her mouth and threaten with a knife. Mohammed Hafizul also join with Mohammed Farid both were bring into her in near by jungle and rap up her hand and mouth with cloth.

Both get ride of her Salawer ( lower part) and Mohammed Farid raped her brutality when Mohammed Hafizul captured her hand. After Mohammed Farid, Mohammed Hafizul did same brutally raped and this is going on one after another during an hour. They threaten me if I shout and tell to anyone they will kill her including her parents.

The Principal of pabna Edward college Dr Mohammed Humayun Kabir, and Head of department and other teachers and journalists local people also claim to asking justice and arrest the perpetrators. After a long months the perpetrators are not  arrested yet. Even the perpetrators are threatening to withdraw the case against  them unless they will raped again and killed her.

However, Papri is the student of 2nd year student of History department , Pabna Edward college. We want immediate arrest to the perpetrators and give them punishment according to the law.