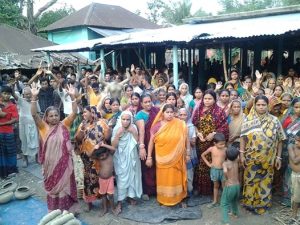 various types of repressions since long committed by some extortionists. Due to repeated extortion of money some of the families already left for India abandoning their profession as per news paper report and statements of local Hindus having no justice.Those victims who complained before police and law enforcing agencies many times, but police neglected to take any tangible action against perpetrators namely 1) Md.Khorshed Alam, 2) Md. Hanzela and unknown several others. The Hindu victims such as 1) W. Paul, 2) Prodwip Kumar Paul, 3) Goranga Paul, 4) Gopal Chandra Paul 5) Shymapada Paul of village-Paul Para had left the country having no justice from the local administration. Those Hindu families have got no landed properties to survive, they depend on making potteries. 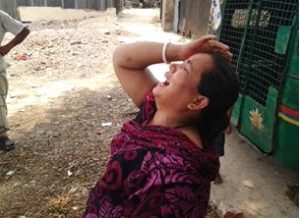 D.M.P. due to threat given to us while we met him at his Kakrail Office,Dhaka for protection & security to a Hindu family ( who had been displaced unlawfully, properties looted, Temple destroyed, women and children physically assaulted for forceful occupation of lands at Nondipara-Khilgaon P.S. Dhaka. A criminal case No.37(11)14 was lodged at Khilgaon P.S. by Ms.Maloti Rani against Muslim perpetrators responsible for looting, arson, rioting & destruction of Hindu Temple, but the Deputy Commissioner of Police (Motijheel) most illegally without any investigation directed the Officer in Charge of Khilgaon PS to entertain false criminal case ( suicidal case No. 12 (9) 2014 under section 306/34 of Penal code ) lodged by one of the Muslim land grabbers with a view to grab ancestral lands of Hindu Victims terrorizing those Hindus to leave the country. It is also alleged that the local M.P. Mr.Saber Chowdhury is responsible for the misery of Hindu victims.